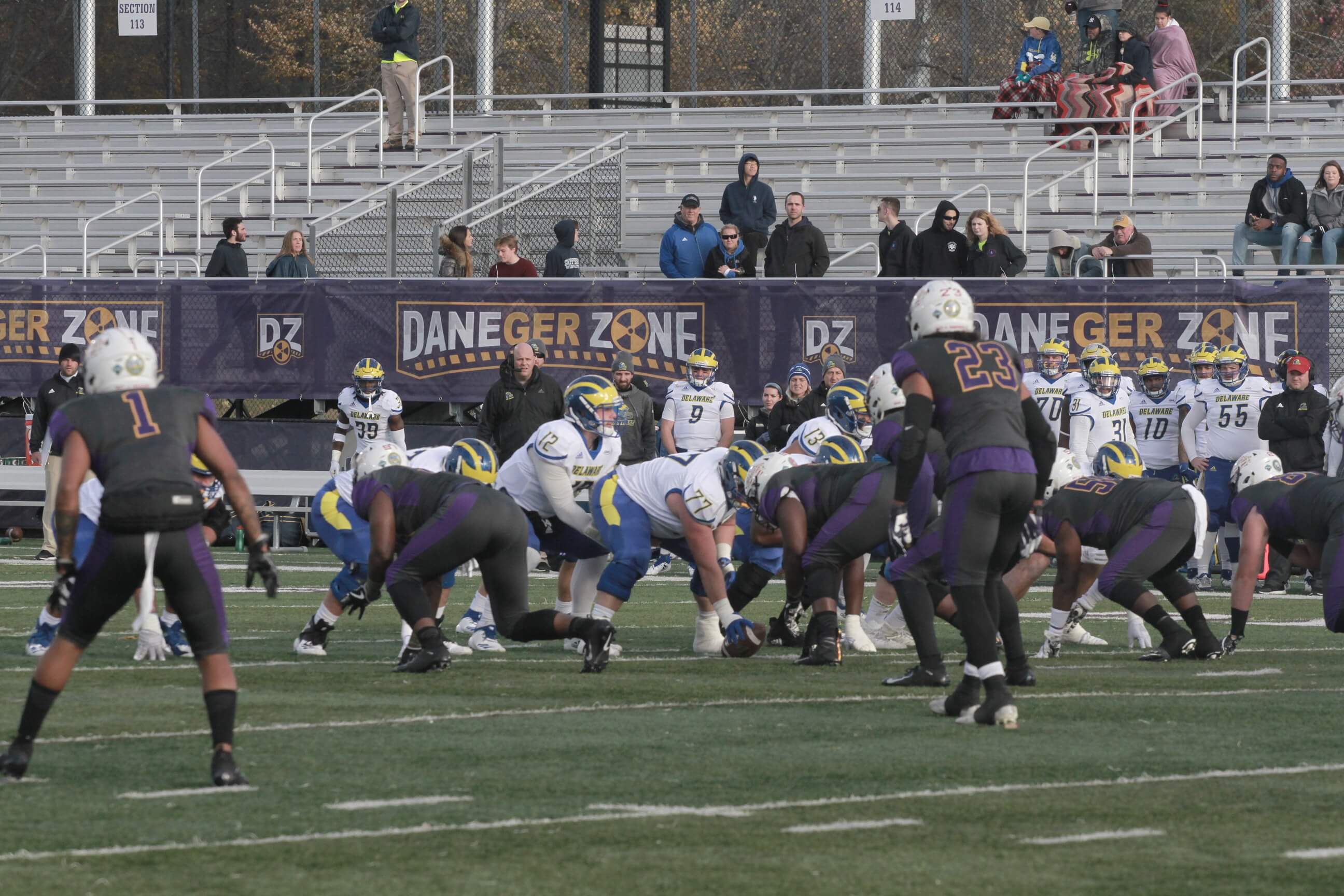 [“I told my players, you have two options walking off the field tonight, you can either feel joy or misery” Delaware football coach Danny Rocco’s comments to his team during the game, when UAlbany was cutting into the lead and coming back into the game]

Going into the second to last home game for the great Danes, Delaware was entering the game, coming off a victory over the top team in the conference, Towson. The blue dens were not only looking to continue their four game winning streak, but they were also playing for a chance to take the lead in the conference. The Great Danes are returning home after losing to the number two team in the conference Maine (28-9), in which two of their quarterbacks (Testaverde and Sussman) were knocked out of the game. The Great Danes were not only coming into the game attempting to snap a four game losing streak, but also attempt to get their first win in the conference, with their third string quarterback Jeff Undercuffler at the helm.

When the game started, weather was clearly going to play somewhat of a factor, as strong winds were blowing all afternoon. Both teams started off their drives as they would like, but could not finish. Delaware who received on kickoff, moved down the field to the 28 and instead of kicking a field goal, went for it on fourth and eight, but did not convert. UAlbany moved down the field, also on their first drive, getting all the way down to the eight. What was looking like a great start for the fresh man quarterback, changed quickly, as he was intercepted by Charles Bell. Bell ran it back to the 30, which would be the turning point in the game. Even though both teams held each other scoreless in the first quarter, the interception by Undercuffler would soon change that. Once the second quarter begin, Delaware was in the red zone, at the one and once again, they could not convert. Instead of kicking a field goal, with the wind to their back now, they decided to go for it on fourth and one and did not succeed.

With two failed attempts in the red zone, it was looking like they were throwing opportunities away, but it actually helped them start their run in the second quarter. When UAlbany took over at the one yard line, they could not get out of the end zone, as running back Ibitokun Hanks, was tackled in the end zone for a safety. On the next drive with Delaware receiving the ball, after the safety and starting with great field position, because of the kickoff, Delaware marched right back down the field, but in quick strike fashion. Quarterback Pat Kehoe completed a 42yard pass downfield, which was followed by a one yard touchdown run on fourth and goal, form running back Eddie Kane, to give Delaware a 9-0 lead. After 3 three and outs, between Delaware and Albany, both teams ended up scoring on their drives before the half, Delaware scored on a 50 yard field goal from kicker Frank Raggo. This drive alone ate up most of the time on the clock and gave Albany 48seconds left on the clock, but nevertheless the Great Danes responded as they got into field goal range and ended the half with kicker Ethan Stark kicking a 21 yard field goal and also prevent them from going scoreless in the first half.

When the second half started, UAlbany picked up right where they left off at, as they scored on their first possession. A six play, seventy five yard drive, with Undercuffler completing passes to Reed and Holmes and Hanks running for 42 yards, seven of which he ran for a touchdown, cutting the lead from 9to 2 (12-10). For most of the third quarter, there were more three and outs and it was becoming a field position game, until near the end of the quarter. Albany punt returner D. McDonald fumbled and Delaware recovered at the 20, which resulted in a field goal and building a two point lead to five, but Albany did not go away. To start off the fourth quarter, they responded with a 13 play 75 yard drive,that took 6:25 off the clock and ended with running back Karl Mofo scoring on a four yard touch downrun and taking the lead 16-15. The game seemed to be in Albany control, for most of the fourth quarter,as the next five drives were three and out, but that did not stop Delaware from completing an 11 play 83yard drive at the end of the game to get the victory over the Great Danes. This defeat made it their fifth loss, whereas for Delaware, this was their fifth straight win. At this point UAlbany is playing for pride and to stop the losing streak to end the season.