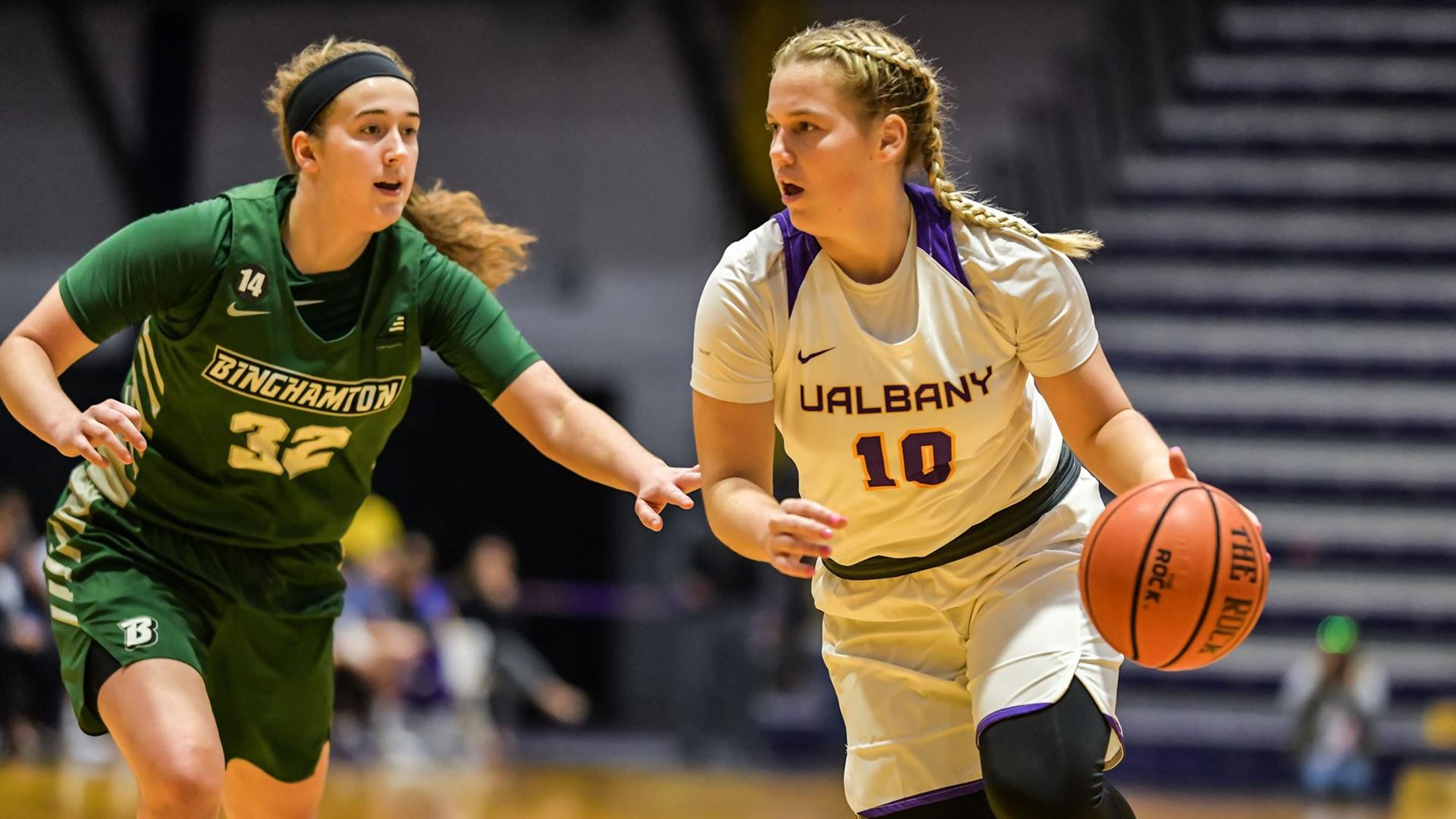 “I mean I just wanted to go get it, I was not trying to lose this game. I saw it go up and said let me get
that thing”– Amanda Kantzy

The story line in today’s game, was it is commitment to Education Day, where hundreds of kids were in attendance rooting and cheering for UAlbany. UMBC was coming into town with a two game winning streak, with their most recent victory over last season American East champs Maine in their arena, which is very hard to do, even though they are not the top team in the conference. Not only are they coming into town with their impressive victory over the American East champs, they also had two players earn awards, Te’yjah Oliver who won player of the week and Lyric Swann who earned rookie of the week award. Even though their record shows they are a middle of the pack team, they also show they can beat a team any given day. UAlbany is coming into this game, recently with a win over the win less Hartford Hawks and looking to make their streak two and also get back to .500 in the conference

As the game started it was a tight contest, both teams were doing everything in their power, not to lose this game. They were also were not shooting well offensively on both sides, as UAlbany was shooting 40% and UMBC was shooting 28% at the end of the first period, but the game was still close with UAlbany winning 12-11. Alexi Schecter their leading senior and one of their top offensive and defensive threats, had only played three minutes in the period.

As the second period had begun, both teams, seemed like they were beginning to find their rhythm. For most of the second period, they were going back and forth, answering each other and at the half UAlbany was leading 23-21. Their shooting percentage went up in the second period to 50%, they also were getting half their points off of turnovers and the other half in the paint, Frames who was injured and played all 20 minutes of the first half, led the team with nine. UMBC who was not shooting well in the first half, was still in a great position to come back in the game, Their key to staying in the game was their rebounding, scoring most of their points in the paint and Rubio who led the team with 11. Schecter also did not play at all in the second period.

In the third period UMBC were shooting the ball better and were out rebounding and outscoring the Great Danes, which eventually led to UMBC taking the lead at the 4:17 mark (31-29), with Rubio leading the charge with 13. UAlbany ended up sustaining through the run that UMBC made to take the lead with getting stops, playing defense, holding Swann and Braxton their two hot hands to two points, with the assistance of Schecters return for half of the period. Also what assisted them to ending the period to their biggest lead was Kierra Frames three point shot, which had them up by five at the end of the period (40-35) and Frames leading the team with 12.

After that UAlbany never looked backed, the closest UMBC came to winning this game, was when UMBC came within one (50-49) with 27 seconds left in the period, when Lucrezia Costa scored on a layup. What sealed the victory over UMBC was when Kantzy grabbed a rebound from Frames missed shot and Frames got the ball back and drew a foul and made one of two of her free throws. She went 5-8 for the remainder of the game sealing the victory and never giving UMBC a chance to regain the lead.

What was impressive about Frames in this game was the amount of minutes she played (all 40 minutes), while
leading the team in points and was the second leading scorer in the game and also assisting in containing the player and rookie of the week to a combined 10 points.

Frames was clearly playing with a confidence and ability that we expect from her at this point in her career, when asked about her play today, Coach Mullen stated that “That this is the type of play the team needs from the injured point guard for them to be successful” and Frames even admitted that her team was behind her, in being
aggressive with the shot taking, even injured. Frames stated “That when I take the shot and I miss it, they are telling me to keep shooting! When you get that from your teammates and your coaching staff, that gives you a lot of confidence in your game”. As far as defensive effort she contributed to shutting down Oliver and Swann, Frames stated that “I think we just prepared very well, our coaching staff pushed us in practice, most important thing was to contain Swann left hand, because she is a left
handed player, that was the focus in the game, but limiting her was definitely a key to us winning the game”.

Now Albany has to go on a two game road trip, starting with Vermont, who is on a three game losing
streak and is hungry for a win to stop that streak and after that a trip to Binghamton, who they defeated
n their first match up of this season and even though they they are .500 in the conference, they are 15-6 overall. When this was brought to coach Mullens attention at the press conference Wednesday, she stated “Thanks for the bad news”, but also stated that “ She has her blinders on and is seeing one game at a time and to focus on rising in a conference that with the exception of Stony Brook, every other spot is wide open”. Coach Mullen is right, after Wednesday victory, the Great Danes have moved up to the number four spot in the conference and if they can repeat the success they had against these two teams earlier in the season, they could be looking at a #2 or #3 spot, only time will tell, stay tuned!