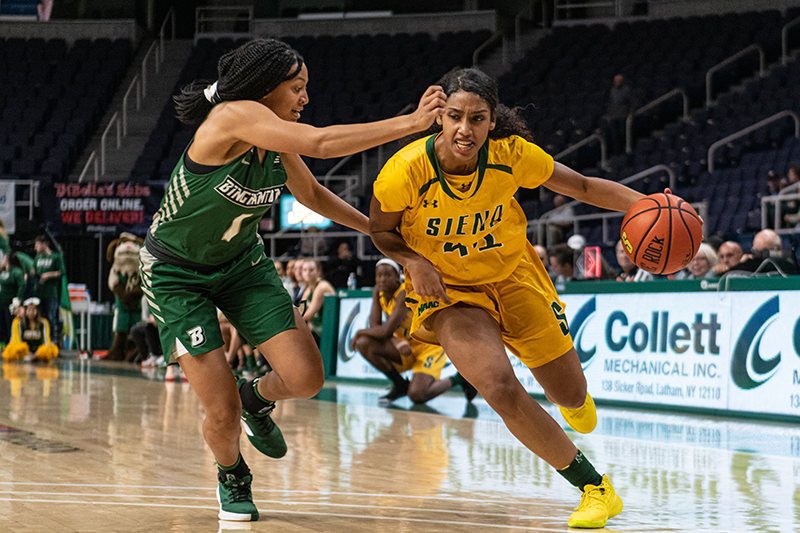 “You want players, that have a love and passion for basketball and thats why were here. That’s what makes it fun every single day”

These were the quotes from Siena women’s basketball coach Ali Jacques, on the women’s basketball team, during media day. Those quotes seem to be accurate, as the type of mentality, the players needed, to have going into the season. With the way the season ended for 2019 and the losses/hits they took before the season started. It was going to be a long road/journey to a successful season. Last season was rough for the saints, who finished the regular season 12-18 and had a three game losing streak going into the MAAC tournament. Even though they have never made it to the MAAC Championship, they have always been competitive in the tournament and getting past the first round.That did not happen, they were eliminated in the first round by Iona, who only had won five games the whole season and on paper, they were better then.

Fast forward to the 2019-2020 season, the Saints went into the season with an uphill battle, before it started. In the off season, their guards Joyella Gibson and Aaliyah Jones graduated and one of their seniors/returning starters Maddie Sims transferred to UMass, so that only leaves returning senior Sabrina Piper, with the most experience on the team. Even though Piper is a great piece to build around,she can not carry the team by herself and with her being the focus point of every opponent, it is going to be more difficult to score. The struggles showed, once the season started and it was not the fact that they were losing, it was the way they were losing. In their season opener/first game, they lost to Binghamton by 27 points (89-62) , loss to Penn by 48 points, Harvard by 17 points and Florida Atlantic by 44 points. Their 1-5 start was expected and it was not seeming to get any better, until they had a temporary bright spot, when transfer Rayshel Brown joined the team. Her impact, especially defensively was felt and it started off right, as they got the win over crosstown rival UAlbany. This was a big win for the program, considering the fact that Ali Jacques has never beat UAlbany her whole tenure at Siena.

Since Brown has joined the team and even though their record does not show it, other then the Fairfield game, from which it was their first game, in three weeks. Siena has been competitive to the wire, which is what coach Jacques expects and wants. Although they finished the first half of the season 2-7 and at press time started conference play with an 1-4 record, the Saints still have a chance to turn this season around. Everybody knows when conference play starts, it is a whole new season and if Jacques wants to turn i\this season around, she is going to have to do it with great defense and scoring, only time will tell,stay tuned!