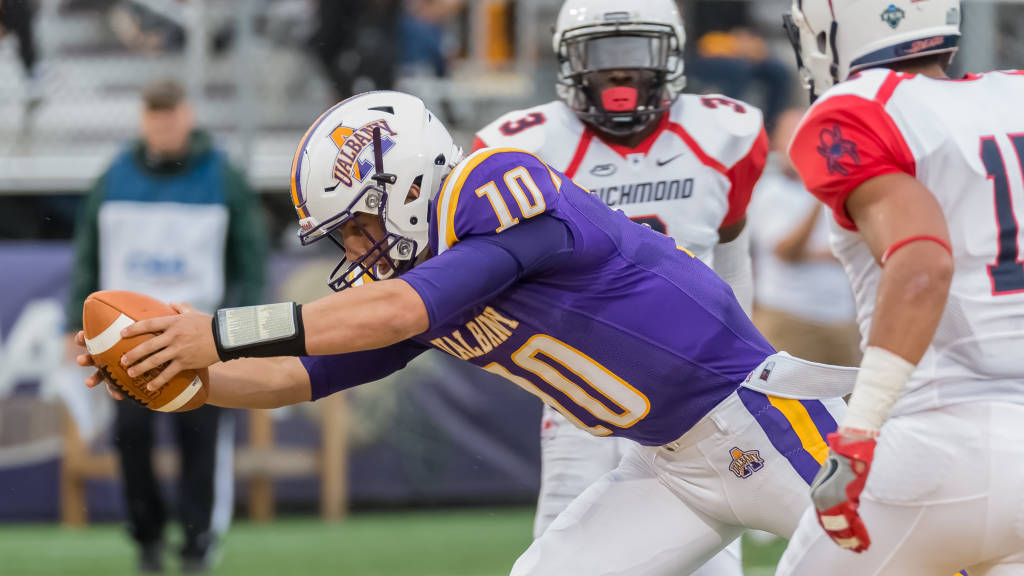 Coming off the bye week and having yet to lose a game, the question on everybody’s mind, were how was Albany going to come out and play. They responded by scoring on there first drive with quaterback Neven Sussman scoring on a 19 yard td run on there first drive of the game, taking a 7-0 lead. For most of the first quarter and going into the second quarter, Albany was controlling the pace of the game, but Richmond made some adjustments in the second quarter also, which lead to them tying up the game 10-10. As the second half began, Richmond controlled the pace of the game by running the ball effectively behind running back D Thompson. and converting on third downs, with the passing of Kyle Lauletta, which led to a fourth quarter lead 20-13. Even though Richmond played lockdown defense and intercepted Albany quarterback Sussman twice, Albany still found a way to get back into the game and score with 1:20 left with a Sussman to Crockett completion that led to Albany tying the game 20-20 and going into overtime.

In overtime both teams were going back and forth, scoring, but Richmond’s D Thompson was to much as his 14 yard td run and the nail in the coffin TD run, which he fumbled, but eventually lead to the winning score. Albany did try to respond, but was unsuccessful as Sussman attempted to complete a pass in the end zone, but was hit on the play, which lead to him missing the completion. What was most noticeable during the game, was how even though Richmond quarterback Kyle Lauletta threw two interceptions during the critical part of the game, coach Danny Rocco stuck with his quarterback. Coach Rocco quoted that Lauletta is there guy, he knows when he throws picks like that, he has to do better and will, he is our quarterback and that’s who were sticking with. As for Albany, now that they have received there first loss, everybody will see how they will respond,with there next two games on the road at Maine and Villanova. They will either learn from this loss and it will help them go on another run of victories or they will not and go in another direction, only time will tell stay tuned!