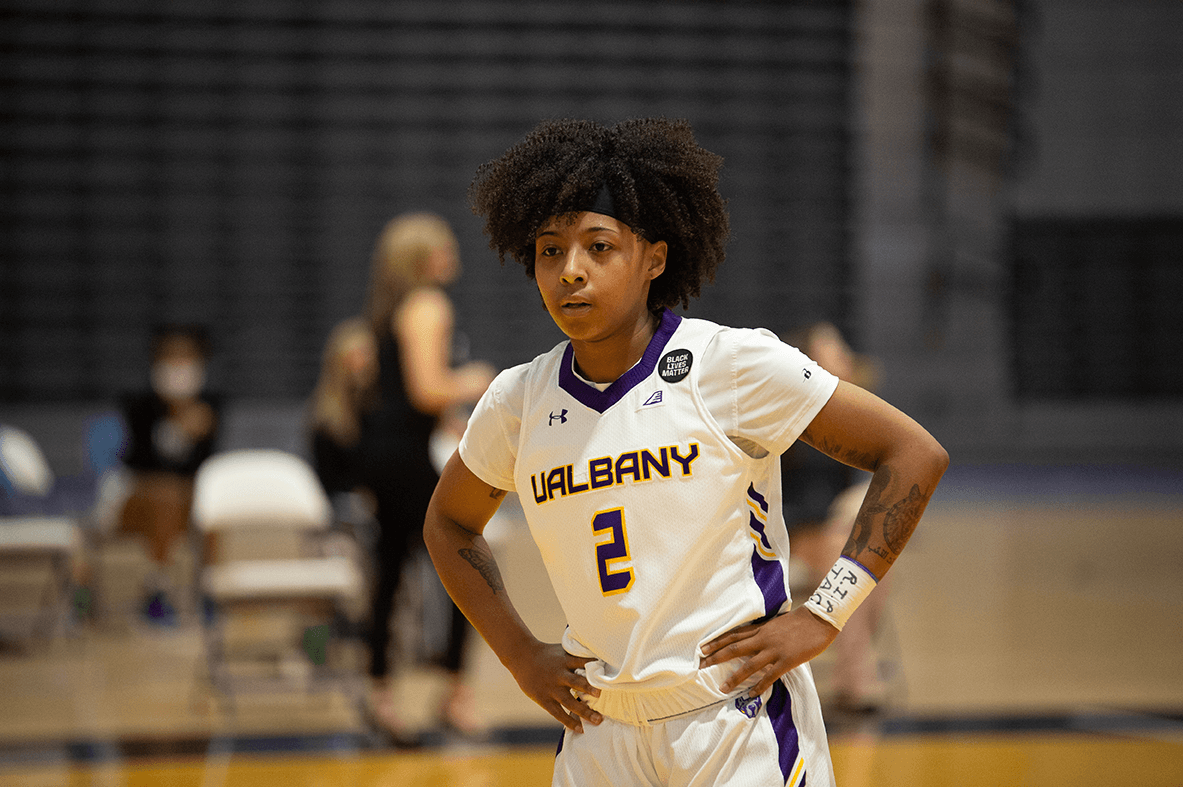 [“I can’t say enough about how excited I am that our team gets to continue on and play Maine next weekend. To do this in the circumstances of the pandemic and all the adversity this teams faced, I feel so lucky. We knew this was going to be a difficult game plan because UNH does a good job of changing their defenses but I’m proud of how our team responded to that. We had a really balanced attack and keeping them off the offensive glass was key. We grinded it out and found a way to win and I’m really excited we get to go play Maine.” Comments from UAlbany womens basketball coach Collen Mullen, after their victory over New Hampshire in the quarterfinal in the American East Playoff game”]

The storyline going into the quarterfinals game of the American East Womens baskeball tournament, was their were six teams that had played through the coovid season and made it/qualify for the tournament, to earn a trip to the big dance. Four of the six teams (Umass Lowell, NJIT, New Hampshire and UAlbany) were playing in the first round/ quarterfinal and Maine and Stony Brook, got a bye in the first round. New Hampshire came into the tournament, looking to start a new, rebounding from their three game losing streak, with thier most recent loss, to the Maine Black Bears by 29 points (82-53). UAlbany was also coming into the tournament, looking to start a new season, after finishing with a three game losing streak. On the upside they were entering this years tournament as the #4 seed, hosting the quarterfinal game, as oppose to last season, as the #8 seed. Hoping to have the same outcome as the last time they played the Wildcats, with a victory.

As the game started New Hampshire got off to a 6-0 run, but UAlbany quickly rebounded, as they tied the game up (6-6), midway through the period. That was followed up by a three from Kyara Frames, swinging the momentum to UAlbany, forcing New Hampshire to take a timeout. This was the most crucial time of the game, because after that UAlbany never looked back. By the end of the period they were leading 15-6, shutting down New Hampshire scoring, as they only scored six points in the second period also. By halftime the Lady Great Danes were in control, leading the Wildcats 25-12, with Frames leading the way with 8 points.

Going into the second half, it look like UAlbany had to just continue their play from the first half and they could look forward to the next run, but the Wildcats took back the momentum that they started the game with and came back with it in the second half. At the 5:52 mark, UAlbany had to call a timeout, as their 13 point lead had been cut to 7(27-20), the wildcats had went on a 8-2 run. By the end of the period the lead was reduced to 4 (33-29), the Wildcats were playing with a different energy, from the first half. UAlbany was losing the turnover battle and they were working for everything, New Hampshire was giving 100% on both sides of the ball.

For most of the fourth period, it was a back and forth match, as the Wildcats, cut the lead to one (36- 35), at one point. What changed the game/sealed it for UAlbany to put the Wildcats away, was when Helene Hangerstrand, hit a three pointer, with 1:12 left in the game, to increase the lead from 2 to 5. After that Frames hit mulitple free throws, to officially put the game away for the Great Danes. Their prize for winning this game was a trip up to Maine, to face the #1 seed Black Bears.