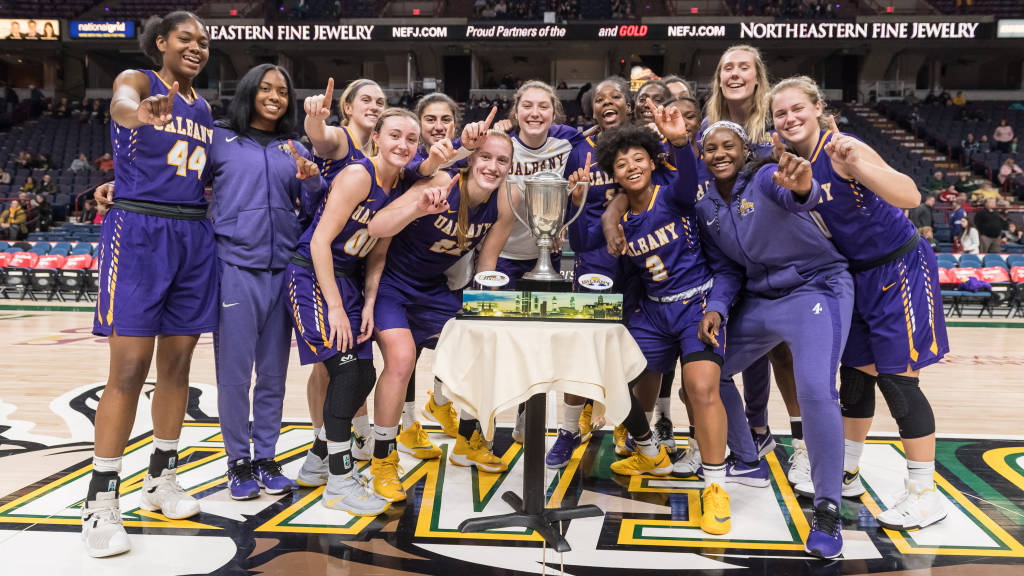 Coming into the 2017 season the UAlbany women are coming off a successful last season,that well exceeded expectations. Last season, with there star players Shereesha Richards and Cassandra Edwards gone from the previous season, also there coach Katie Abrahamson-Henderson leaving for the University of Central Florida job and new coach Joanna Bernabei- McNamee coming in, the Lady Great Danes season was on the outside looking in, like it was up in the air. With guard Imani Tate returning, you knew they were going to be competitive, but how competitive was the question. At the beginning of the season things were looking rocky as UAlbany got off to a 3-5start, not to mention, injuries played apart also.

There were times during the season that Tate was missing games due to injury and when Tate was playing, Tripic was missing games due to injury, it was not until near the end of the season that both were on the floor and with both guards on the floor and Jessica Ferique coming off the bench with her energy and play, the Danes took off right where they started from. Going into the tournament, with a six game winning streak and 18-11 record, they were looking like the team from the previous season and even then critics thought they would not make it out of the second round. Once the tournament started, UAlbany ended up proving everybody wrong again and showing why they are the champs. Not only did they defeat Vermont in the first round, but defeated Hartford in the second and beat Maine to claim the American East title and solidify a guaranteed spot in NCAA tournament. Even though they ended there season 21-12 and with a loss to the number one team in the nation, top seeded UConn, they achieved more then what a lot of people expected.

Now that they have once again shown why they are the champs, they are coming into this season with the us against the world mentality and with the expectation that they are supposed to be the team to beat. They not only have there eyes on winning there conference and taking care of business, but to return back to the big dance/NCAA tournament and not just be content with an appearance or invite, but to go in and dominate like they do in the their tournament.These expectations are clear especially on media day, when coach Bernabei-McNameestated that what she learned from the UConn loss, is that they have to have a similar mentality and play as the top ranked Huskies, with the speed and intensity and that in certain situations , the question poses what would UConn do. Ferique also stated that she learned also from there tournament loss, that coming into this season, they want to be looked at the same way as the top ranked team in the nation, as she stated when people see us coming, there is UAlbany and the only way to get to that level is hard work and dedication.

It already seems as if the Lady Great Danes are on the right path of reaching there goals as they sit on top of the conference at 6-2 and looking like the team to beat. With coach Bernabei-McNamee having a year under her belt with higher expectations then last season and with returning starters Ferique, Tripic, Foster and Kyara James contributing, now becoming the spark of the team off the bench. The Great Danes are on pace to take that the top spot in the American East Conference once again and to exceed expectations and prove everybody wrong. The question is how far will they go, only time will tell, stay tuned!